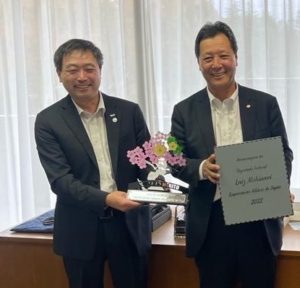 Brazilian federal deputy Luiz Nishimori visited Japan in April. He was on the Brazil-Japan Economic, Business and Friendship Mission.

He received a tribute from a group of Brazilian businessmen with the trophy made by TMK.

The trophy has the shape of a cherry blossom and a green and yellow ipê (Brazil`s National Flower), symbolizing the integration between Brazil and Japan.

The CEO of TMK, Tomio Tadocoro, presented the trophy to the deputy.