The Consulate General of Brazil in Tokyo organized the Burajiru Grand Chef 2020. The winner of the third edition of this gastronomy contest was Lucas Yamauchi. He created the “Asian Chicken”, an unique recipe with a mix Brazilian and Japanese culture.

He holds a degree in gastronomy from Universidade Anhembi Morumbi, in São Paulo. Lucas received the trophy specially made by TMK. The trophy was made with inox steel and the symbol is a knife. 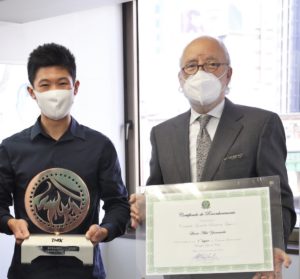