The Brazil Embassy in Tokyo recently paid tribute to Japanese authorities who received “Amigo do Brasil” (Friend of Brazil) trophy.

The objective was to thank the authorities for the relationship with Brazil. The trophy was made by TMK. The format of trophy is like sakura flowers and green and yellow ipe in the center. The trophy symbolizes the integration between Brazilians and Japanese.

Following is the list of authorities who received the trophy: 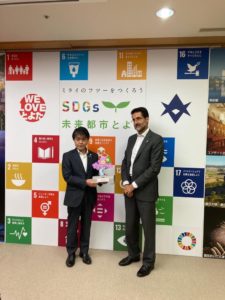